I had the pleasure of meeting Mick Marion a few years ago through the Watchung Hills Wrestling Association, which I have been a part of for over 6 years.  As a big supporter of the program, I was very happy to see the culmination of years of hard work and effort come to fruition when the new facility on Mountain Ave was finished.  Mick not only supported the program, he was instrumental in the building process of the new facility, and continues to be a big supporter of the wrestling program as well as other sports programs in town.  I appreciate having someone who is always looking out for Warren’s Youth.  On a township level, he has worked to maintain the services and quality of life that we, the residents, have come to expect.  I appreciate his hard work and dedication to the township of Warren and its residents.  I support his efforts and encourage others to vote Marion-Lazo on November 7th. 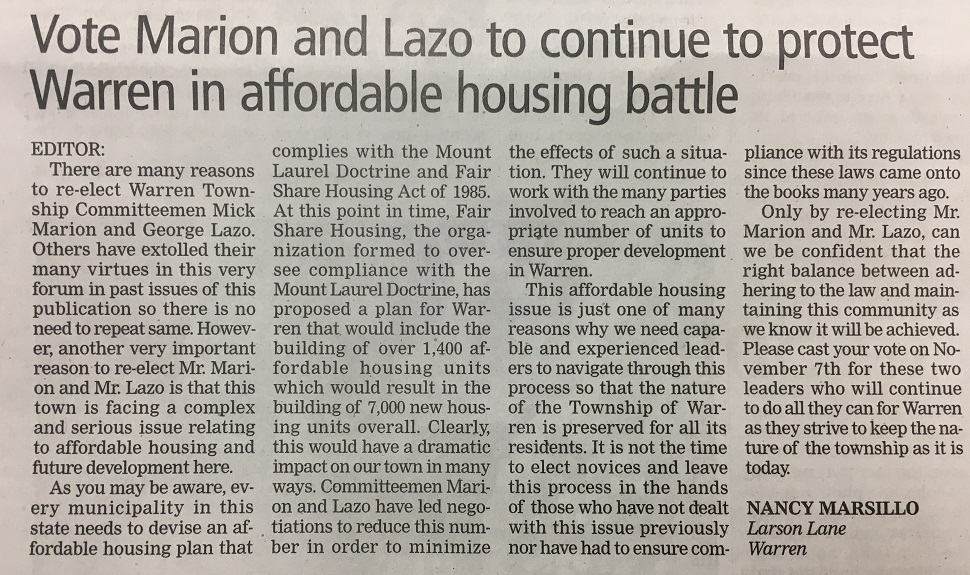 Over the years Warren Township has had many members of its governing body that have made this municipality the wonderful community it is today.

We now have the opportunity to re-elect two members of the Township Committee, George Lazo and Mick Marion, to continue providing strong and valued government for the residents of Warren.

Having been a prior mayor, and member of the Township Committee for 15 years, I can speak to the value of the government both have provided in their years in office.

I strongly support George Lazo and Mick Marion for re-election to the Township Committee.

Before they ever thought about running for political office, Mick Marion and George Lazo had made significant contributions as community volunteers. In the past six years as elected officials they have proven their ability and effectiveness to maintain the high standards of local government that Warren residents expect.

We have been impressed with their willingness to commit enormous amounts of time and energy to Township business, to be available to and listen to individual citizens, to find original and creative ways to solve problems. Both are straightforward and down to earth.

We hope Warren voters will explore their web site, Vote-Marion-Lazo.com for an overview of their positions and accomplishments.

George Lazo and Mick Marion are truly dedicated public servants who deserve our votes for re-election.

Committeemen Mick Marion and George Lazo are my picks in the November Elections.  They represent the interests of all residents in Warren Township no matter what party people belong to.  They have proven that they are a responsible team who have worked to protect our environment improving Warren’s open space, developing the East County Reserve, limited the overdevelopment of homes and commercial buildings, purchased open space and supported our Fire, Rescue and Police Departments with new vehicles, equipment, and additional volunteer staff. Their great efforts are applauded in working cooperatively with our County Freeholders to obtain and improve the County parkland and for sports fields for our children.

Meanwhile they have continued to keep the property tax rate as one of the lowest in the County.

Mick and George are part of a five-person Republican team who are respectable, open to communication, and bring new refreshing ideas to the office of elected officials in Warren.

Warren Township has been extremely fortunate to have thoughtful, responsible leadership for many years.  Our township council has worked very hard to keep Warren a safe, stable and wonderful community to live and raise our children.  Mick Marion has been part of this leadership and has committed enormous amounts of time and energy to keep Warren moving forward in the face of uncertain times for municipalities.  In addition to the amount of time Mick spends on township matters, he is also deeply committed to our local youth by volunteering in our youth sports programs particularly our Pop Warner football program and Hills lacrosse. These programs are so important to instill a sense of community and pride in our children and do so much to give our children a “hometown” that will always be a part of them.

Not only does Mick share the same concerns of homeowners and parents, he has actually taken the initiative to step up to make sure that Warren remains the great town we love.  That’s why it’s so important that we have Mick continue to his good work.  We wholeheartedly support Mick and hope that everyone else does.

Having lived in Warren for over 15 years and knowing George Lazo for the better part of a decade, I’ve seen that his passion for the community is unsurpassed.  I first met George when he started coaching my 7 year old son in football.  Jonathan is now 17 years old and he still calls and looks for George for advice and guidance.

Both George and Mick Marion have spent years serving our community with integrity and professionalism to make our town the best.

I am relatively new to Warren Township. Having the need to find housing in Warren, I connected with Committeeman Mick Marion who was exceedingly helpful with my search in finding a place to live.

I’ve long wanted to locate here and have followed the progress of the Township Committee as part of my search to relocate. Through this, I met Committeeman George Lazo as well. I am most impressed with not only what these two have accomplished for our township, but how personable and accessible they are with residents’ needs.

I am extremely impressed and grateful to have such leaders in our community. It’s a rarity in this world we live in. Please vote Marion/Lazo on June 6.

Mick Marion and George Lazo are pioneers in Warren Township.

They exemplify what towns need as leaders. We have known Mick and George since first moving to Warren 15-plus years ago. Through the fortune of having both our daughter and son attend school with Mick’s kids, we have come to know the Marions quite well. Both our children have participated in Pop Warner football and cheer dating back to 2007. George and Mick and mutual close friends carried our daughter and son all the way to national titles at the Pop Warner National football and cheer competitions – not just once but two to three times. Let us just say the passion and dedication to these kids more than matched our passion and dedication. That speaks volumes when it comes to shaping our children now and for the future.

Working side by side as coaches and as volunteers year after year and attending many outside functions with both George and Mick, we can honestly say these two men truly care about the township of Warren. They are reliable, trustworthy, intelligent, and highly generous with the time and effort they have put forth in the organizations in this community. They are there of their own free will time and time again to benefit all families in this great town we live in.

JOHN and JEAN KING
Top of the World Way
Warren

We have known Mick Marion and George Lazo for the past several years as devoted community leaders who have a proven track record of dedication to the betterment of Warren Township. They have served the community tirelessly and with the utmost professionalism for the past 15 years on many levels.

Mick and George were instrumental in working with the county on the development of the East County Park and have had a hand in multiple other township projects that have made Warren one of the best places to live in the country.

They have also had a positive impact on the youth of our community. They both give countless hours to many of the sports programs in town and coach several different teams and sports. They have been exemplary role models for the boys and girls in Warren.

Leadership through example is what we need for the continued success of Warren Township. Please come and show your support on June 6 and Nov. 7 and vote for Mick Marion and George Lazo.